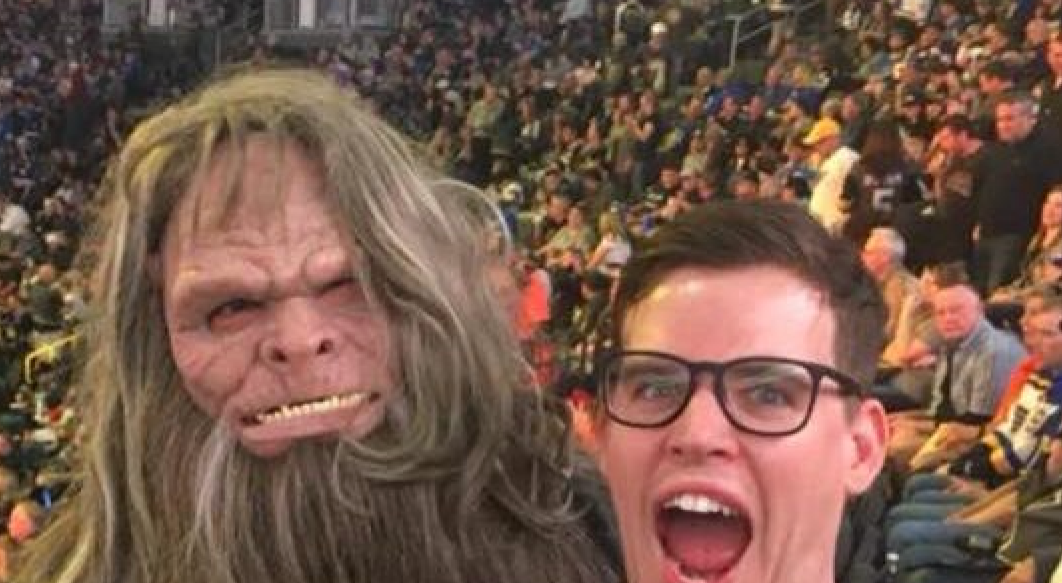 Gate City native finds success as ‘Sasquatch’ GREG PETERS, SUNDAY STORIES • NOV 6, 2018 AT 4:30 PM link: http://www.timesnews.net/Community/2018/11/06/Gate-City-native-finds-success-as-Sasquatch.html One of the keys to a successful marketing strategy is promotional tactics, and Andrew Lunsford’s strategy in the Las Vegas real estate market has proven to be more than successful. In fact, the Gate City native legally changed his name to Andrew “Sasquatch” Lunsford to go with the Signature Sasquatch brand that promotes the Signature Real Estate Group for which he works. So, how does one get from Gate City, Virginia, to occasionally wearing a professionally-made Sasquatch uniform in Las Vegas, Nevada? We’re glad you asked. “After college I became a Virginia State Trooper and worked in the Northern Virginia area for nine years. I met my wife Rhonda, who is from Grundy, and she took a pharmacy position in Las Vegas. So we moved here and I went into corporate security,” said Lunsford. “I started acquiring property but wasn’t happy with the quality of realtors that I was dealing with and Rhonda suggested I get into real estate and start my own brokerage.” From there, Andrew started his own successful brokerage and later sold it to the Signature Real Estate Group. With a yearning to get back into sales, he turned around and went to work for Signature. ‘Marketing genius?’ A trip to Los Angeles, California, and a visit to a top marketing company laid the groundwork for his Signature Sasquatch character. “When I talked to them, my idea was that I wanted to tell clients about the hidden dangers of real estate such as foreclosures or short sales. The conversation turned to things that are hidden and somebody suggested Sasquatch as somebody who is well hidden,” Lunsford explained. From there, it was on to Total Fabrication Inc., also in Los Angeles, to develop a Sasquatch costume. The company makes costumes for major films, television, theme parks, and even concert tours. Signature Sasquatch has proven to be a hit wherever he appears in the Las Vegas area. He is fond of the Las Vegas Golden Knights hockey team and can be found at many of the games supporting the home team and posing for photographs. The name change? After Lunsford promoted Sasquatch in his business title, someone complained to the Nevada Real Estate Division – which doesn’t allow the legal promotion of a fictional character in your real estate name. So Andrew simply changed his name. And, Lunsford said the judge was heard referring to it as “marketing genius” as he made the change legal. Giving back With flourishing careers thousands of miles away, Andrew and his wife have not forgotten where they came from or the importance of giving back. “We have had good fortune and make the effort to give back to Scott County. In honor of my late mother, Margaret Ruth Lunsford, we have provided eight scholarships over the past four years for Scott County students under the Signature Realty Group,” said Lunsford. Margaret Lunsford taught in the Scott County School System for over 30 years, while Andrew’s father, M.A. Lunsford spent his career with and retired from the Virginia State Police. His father – as part of the Rotary Club – was also responsible for helping to bring Dolly Parton’s Imagination Library to Scott County. Another personal cause for the Lunsfords is Nevada Reading Week held every January. The week places a strong emphasis on literacy and the importance of reading. His wife Rhonda has taken her interest even further as she has just written her first children’s book, “Sasquatch Finds A Home.” The book will be distributed to children next January. Success as Sasquatch While you may not believe in Sasquatch, you can believe that this one sells houses. “Just recently I sold a million dollar listing for Britney Spears’ wardrobe manager. She was originally from Kentucky and believed in Sasquatch, and that led me to beat out six other realtors for the sale,” Lunsford said. “… The Las Vegas real estate market is still a great investment opportunity. I have numerous clients from Southwest Virginia and East Tennessee and the city is really coming into its own as a community.” Andrew and Rhonda, currently a pharmacist with Briova Health Care, have two daughters. Sarah is pursuing a double major in Biology (Pre-Med) and sports marketing at the University of Nevada Las Vegas (UNLV). Emily is enrolled at Liberty University in Lynchburg, Virginia, studying sports marketing. The latest sightings or appearances of the Signature Sasquatch can be found on Facebook, while Andrew can be reached online at www.SignatureATeam.com. Thanks KPTN writer-journalists Greg Peters for the great story.

About Me
Blog Posts
My Listings
Open Confirm
Message Sent

Thank you. Your message has been sent.

Dismiss
We would love to work with you

How can we help?

Whether you're buying or selling a home, need guidance on mortage options or would like to discuss the real estate market in your area, we would love to hear from you.

Sign In Form
You are in live edit mode

Select a layout for this section

Add any image with optional title and text below.

Add a YouTube or Vimeo video with optional text.

Add two images with optional title and text below.

You are in live edit mode